“Ginger, move down a few more, please,” Elizabeth says, nodding to her daughter to keep moving, the frustration evident on her face. “Hurry up. The movie is about to start.” Ginger looked back to her mother to make sure that she’d gone far enough. Elizabeth gave her the thumbs up as there were now enough seats for the entire family. One by one, each child sat down, Elizabeth taking her seat at the end. She sat down with a loud sigh, looking forward to taking a long sip of her vodka-laced soda. The kids weren’t aware, of course, that she’d slipped a handful of mini-bar-sized bottles of vodka from home into her purse. Thankful for the noise of toilets flushing and handwashing in the bathroom, she was able to tip those bottles in without detection.

The day certainly started well, but getting the five in her brood together, in the direction of a planned family outing, had been a bit stressful. She was looking forward to just sitting in the dark and letting her mind be distracted by the light-hearted film they’d decided on. Elizabeth definitely needed some comedic relief. The movie – Bodega Blues – starred two hilarious women comedians. Both were blind trying to run a small grocery store. It was rated PG, so fine for the whole crew. She anticipated there would be a lot of slapstick humor, something the girls would enjoy.

Unfortunately, Elizabeth was also dealing with a bit of PMS, making everything worse. Her candy bar was looking better and better. Thankfully it was a large one; she kept thinking. Chocolate, vodka, popcorn, the kids being under control in the theater, and everyone laughing. Oh yes, it was going to be a good afternoon!

“Everybody, quiet down! The movie is starting!” she half-whispered in their direction loud enough for them to hear but quiet enough not to upset the rest of the patrons in the theater. They piped down and faced forward. Ginger, Jennifer, Shelley, Beatrice, and Sophia looked excited about the movie about to start. Elizabeth was beginning to feel the effects of the vodka. All was well in the world.

For an hour and a half, laughter spewed out of all of them. Bodega Blues did not disappoint. She wasn’t quite sure if it was because of the vodka or the antics. Regardless, Elizabeth was happy to be feeling much better than when she arrived with the kids. She hadn’t had tears running down her face from laughing so hard during a movie in a long time. Who would have thought a story about two blind women in a bodega could be that funny?

“Anyone need the bathroom before we go home?” Elizabeth asked as they walked towards the exit. A chorus of “me, me, me” prompted her to lead the way to the restrooms. Once inside, she pulled out the last mini-bottle and chugged it straight down. Again, the kids were none the wiser.

At the sink, “Wasn’t that a great movie, kids? A woman standing next to her looked at her very strangely.

when you are wobbly
also witty, things shake loose
the house will fall down

It’s a mystery!
Drunk lady hanging mid-air.
How did she get there? 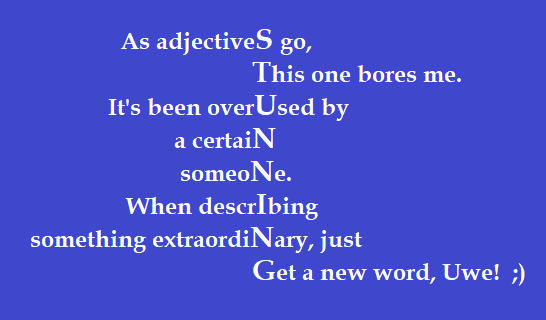